SATURDAY: The Jets will have their starting running back available against the Cardinals. They will move Bell from IR to their active roster Saturday, Rich Cimini of ESPN.com notes.

WEDNESDAY: Le’Veon Bell has spent the required amount of time on IR to return to action, in this unique season, and the Jets have designated their starting running back to return. 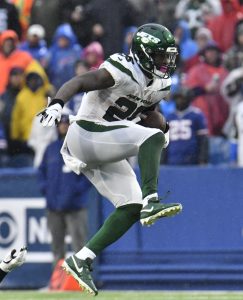 While Bell is not yet on Gang Green’s 53-man roster, the team has three weeks from Wednesday to activate Bell. However, Bell returning to practice points to him being back on the Jets’ active roster by Sunday. He has not played since suffering a left hamstring pull in Week 1.

This will mark the latest chapter for Bell and the Jets — a partnership that has thus far not gone well. Bell and Adam Gase disagreed on the former All-Pro’s hamstring situation during training camp. This, of course, was on the heels of Bell’s worst season as a pro and reports of Gase not wanting Bell — at least, not at the $13.1MM-per-year price tag required — in the first place.

Gase now looms as a chopping-block candidate, while Bell is a near-certainty to be off the Jets’ roster before the start of the 2021 league year — at the latest. But the 28-year-old back is back at Jets practice and on track to return to game action. The Jets have primarily used Frank Gore in Bell’s stead. The 37-year-old back, however, has averaged just 3.2 yards per carry.

6 comments on “Jets To Activate Le’Veon Bell From IR”