After another loss dropped them to 1-10, the Jaguars are making a major shakeup. Jacksonville has fired general manager Dave Caldwell, sources told Adam Schefter of ESPN.com (Twitter link). 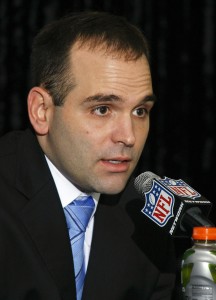 It looked for a while like the Jags were just going to ride out this lost season before making any big changes, but obviously owner Shad Khan felt like he couldn’t wait any longer. Just about everybody has assumed head coach Doug Marrone is a lame-duck coach waiting to get fired at the end of the season, so it’s interesting he wasn’t let go here at the same time like we saw with Matt Patricia and Bob Quinn yesterday. It’s the end of a long run for Caldwell, as he was in his eighth season with the team.

Caldwell broke into the league as a scouting assistant with the Panthers in 1996, then spent ten years as a scout with the Colts. From there he moved on to the Falcons, becoming their director of player personnel in 2012. After just one year in that role, he was poached away to lead Jacksonville’s front office. Khan released a statement politely thanking Caldwell for his time with the team but acknowledging the need for new leadership, which you can read in full via this tweet from Ian Rapoport of NFL Network. Rapsheet also notes that Trent Baalke will take over as interim GM for the rest of the season.

Baalke spent six seasons as the 49ers’ GM from 2011-16 before becoming the Jags’ personnel director back in February. Atlanta, Detroit, and Houston had already fired their GMs in-season, leaving a number of front office head openings around the league.

Caldwell certainly had an interesting tenure with the team. After his hire of Gus Bradley and drafting of Blake Bortles didn’t work out, he was essentially demoted as the team hired Tom Coughlin to run its football ops. Then after a pretty disastrous run which saw most of the star talent get traded away, like Jalen Ramsey, Coughlin himself was fired and Caldwell re-emerged with more power.

Jacksonville was never going to win anything this year with their stripped down roster, and it’s likely Khan was planning for a full-blown house cleaning for 2021 all along. Meanwhile Rapoport tweets that Khan told Marrone after the game he and the rest of his staff are safe through the rest of the season. Caldwell deserves a lot of criticism, but he’ll leave the next GM with an enviable bounty of draft picks.

The Jags had two first-rounders this past April, and they’ll have two picks in the first and second rounds in 2021. They’re entering yet another rebuild, but there could be some light at the end of the tunnel. Priority number one for the new regime will be finding a franchise quarterback, as the current trio of Gardner Minshew, Jake Luton, and Mike Glennon obviously aren’t cutting it.