Interim Falcons head coach Raheem Morris has his team playing well following Dan Quinn‘s dismissal, and it has caught the attention of Atlanta decision-makers. Per Jason La Canfora of CBS Sports, Morris has a good chance to be named the team’s permanent HC after the season. 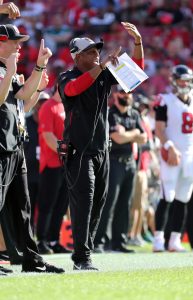 Under Morris, the Falcons have gone 3-1, and the one loss was a 23-22 heartbreaker against the Lions that came on a last-second score (and if not for a poor decision by running back Todd Gurley, Detroit wouldn’t even have had the chance to possess the ball for the game-winning drive). Atlanta’s performance has improved on both sides of the ball, and Morris’ leadership abilities represent another highlight on his resume.

The fact that Morris has now been with the Falcons in a number of different roles since 2015 further helps his cause, as do his strong ties with team president Rich McKay. He was one of the youngest head coaches in league history when he helmed the Buccaneers from 2007-09, and it looks like he might not be too far away from another shot, whether that’s with the Falcons or someone else.

For now, though, Atlanta is focused on replacing deposed GM Thomas Dimitroff. La Canfora says the club is putting its list of candidates together and hopes to hold some interviews next month. Former Texans general manager Rick Smith, who also has a history with McKay, is one person the club would like to meet with.

Presumably, whoever the new general manager is will get to choose the team’s permanent head coach, but that person will have to give strong consideration to Morris if the Falcons continue to play well down the stretch.