It looks like the Rams will be without one of their leaders moving forward. Veteran left tackle Andrew Whitworth‘s initial tests on his injured knee showed a torn MCL and PCL, Jay Glazer of Fox Sports tweets. 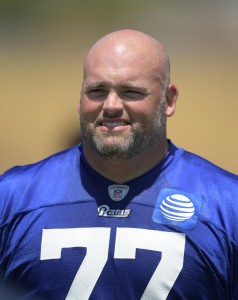 Fortunately, Whitworth told Glazer that it looks like his ACL was spared. Still, it’s a significant injury that is surely going to sideline him for some time, and potentially the rest of the season. These field exams are very accurate, so Whitworth’s ACL is almost certainly in tact. Still at his age, any injury this serious could spell the beginning of the end. He’s one of the oldest non-quarterbacks you’ll ever see play effectively, as Big Whit is set to turn 39 next month.

The stud offensive lineman has flirted with retirement each of the past couple offseasons, but has always chosen to come back. A second-round pick back in 2006, he spent the first 11 years of his illustrious career with the Bengals before signing with Los Angeles in 2017. He’s made four Pro Bowls and three All-Pro teams, including a first-team selection in that 2017 season.

As the anchor of Sean McVay’s O-line, he’s been a huge part of the Rams’ offensive success over the past few years. 2018 third-round pick Joseph Noteboom, who’s primarily a guard and was just activated off IR, filled in for Whitworth during the Rams’ win over the Seahawks after he went down. We’ll keep you posted as soon as we have more details on how long he’ll be on the shelf.