Despite speculation about his job security, Cowboys VP Stephen Jones says Mike McCarthy will “absolutely” be the head coach in 2021. In an interview with 105.3 The Fan, Jones placed more of the onus on injuries than McCarthy’s coaching. 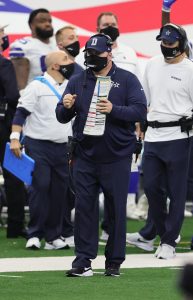 “There will be absolutely no change with coach McCarthy, and I am surprised that someone would question Mike, these unprecedented situations that everyone’s been in on top of that,” Jones said. “No one is making excuses, but we have had some real challenges in the injury category. If you look at his track record and his pedigree, he’s consistently won year in and year out. We have the utmost confidence that this ship is going to be righted quickly, and Mike is going to be the leader of this group. He’s certainly a great head coach and I think we’re going to see that going forward. He’s a great head coach in this league, he’s accomplished a lot, and he’s going to accomplish a lot more before it’s all said and done.”

Jones’ vote of confidence comes on the heels of a morale-boosting 30-7 win over the Bengals. The competition had something to do with it, but the Dallas D gave McCarthy their best performance of the year. That definitely helps the coach’s case, but it probably won’t save defensive coordinator Mike Nolan. In his first DC role since 2014, the Cowboys D has been a total flop in 2020. The Cowboys — in the NFL’s cellar for points allowed – are expected to make some serious changes this spring, even though McCarthy will be spared.