NFL teams have expressed interest in signing Marshawn Lynch, according to Marshawn Lynch. In an interview with Conan O’Brien on TBS (Twitter link), Lynch said that he has heard from clubs and indicated that he’d consider a contender. 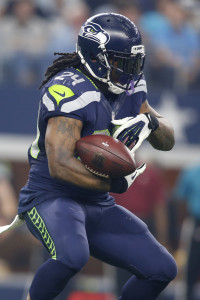 “If the situation is right then it could happen,” Lynch said. “I’ve been asked the question by a couple teams here recently. Like, ‘Are you ready?’ I’m ready if y’all are Super Bowl ready. That’s what it would take me to come out and play again. it would have to be a guaranteed Super Bowl game for me.”

Lynch, 34, returned to the Seahawks late last season to join them for their playoff push. Stepping in for a battered bunch of Seattle RBs, Lynch registered four touchdowns on 30 carries in three games, including two postseason contests. He wasn’t terribly efficient outside of the red zone, however — the veteran averaged just 2.23 yards-per-carry. Of course, expectations had to be tempered for Beast Mode, considering his age and the long layoff period.

It’s not clear which teams Lynch has spoken with or how serious they are about signing him. But, in the COVID-19 era, there’s always an opportunity.