Maliek Collins has started throughout his first Raiders season but will see an injury pause his initial post-Cowboys campaign. 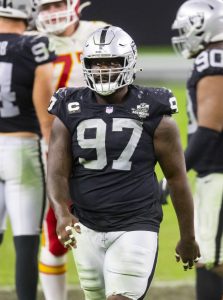 The Raiders are placing the first-string defensive tackle on IR Wednesday, per The Athletic’s Vic Tafur (on Twitter). Collins has started in the 10 games in which he’s played this year but must miss at least the next three. Collins was listed on the Raiders’ injury report with ankle and hamstring issues, but Jon Gruden said the D-lineman has a shoulder injury as well (Twitter link via Tafur).

While the Raiders gave Collins a one-year deal worth $6MM, he has struggled. Pro Football Focus currently has the fifth-year veteran slotted as the league’s worst full-time interior defender. Collins has yet to record a sack and has just one quarterback hit this season.

Working under current Raiders defensive line coach Rod Marinelli in Dallas, Collins recorded multiple sacks in each of his first four seasons. He also notched at least eight QB hits in each of his Cowboy campaigns, creating a mid-level market for himself this offseason.