Word of a positive COVID-19 test forced the Ravens to pull Dez Bryant just prior to kickoff earlier this week. Now, the wide receiver says that he has tested negative for the coronavirus in two subsequent tests (via Twitter). 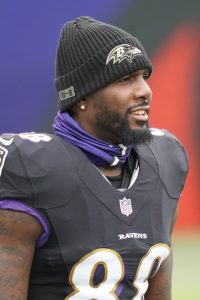 “I tested negative back to back for covid and I’m not excited about it,” said Bryant.

After the first positive test, Bryant said that he would call it quits for the rest of the season rather waiting to go through the league’s protocols. Now, his plans aren’t exactly clear. For what it’s worth, Ravens head coach John Harbaugh says that he plans to have Bryant back once he comes off of the COVID-19/reserve list (Twitter link).

Negative tests notwithstanding, the Ravens have placed Bryant on their reserve/COVID list. Bryant is ineligible to practice until being removed from the virus list. It has, to say the least, been an interesting week for the veteran wide receiver.

The former Cowboys Pro Bowler lobbied NFL teams for a long time before he got his opportunity to return with the Ravens. Since signing with Baltimore, he hasn’t been used much. His only registered stats came in Week 11 against the Titans, when he caught four passes for 28 yards.

After beating Bryant’s former team without him, the Ravens will turn their attention to the Browns on Monday night.