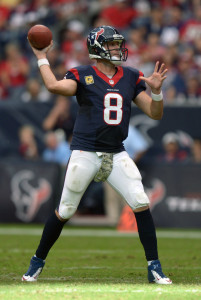 It’s a relatively quiet end to a very interesting rollercoaster of a career. A Virginia product, Schaub began his career as a third-round pick of the Falcons all the way back in 2004. Taken in the same class as Eli Manning, Ben Roethlisberger, and Philip Rivers, he only started two games during his three seasons in Atlanta due to the presence of Michael Vick. He showed flashes in limited action though, and it was enough for the Texans to trade two second-round picks for him before the 2007 season.

He went on to spend the next six and a half seasons as Houston’s quarterback, and had some real success there. He made the Pro Bowl twice in 2009 and 2012, and led the NFL in passing in 2009 with 4,770 yards. He suffered a handful of injuries with the Texans and his play fell off a cliff in the 2013 season, after which he was traded to the Raiders. He lost that starting job to a rookie Derek Carr.

Despite an accomplished run with the Texans, he would start just three games the rest of his career after leaving Houston. Two of those came with the Ravens in 2015 in place of an injured Joe Flacco. In 2016 he reunited with the Falcons, and spent the past five years backing up Ryan.

The last start of his career came last season in spot duty, when he threw for 460 yards in a loss to the Seahawks. He didn’t attempt a pass this season, and will now hang up his cleats at the age of 39. The only other quarterback on Atlanta’s roster is 2018 UDFA Kurt Benkert, and they’ll likely add one in the draft at the very least. All of us here at PFR wish Schaub nothing but the best in retirement.