The Lions are moving forward with their offensive coordinator search. Under new HC Dan Campbell, the team is interviewing Ravens quarterbacks coach James Urban for its OC post, Tom Pelissero of NFL.com tweets. 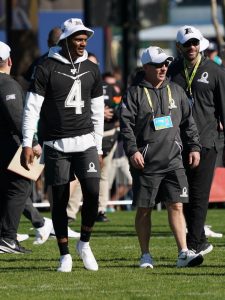 An NFL position coach for the past 12 seasons, Urban has been in charge of Baltimore’s QBs since 2018. The former Eagles and Bengals assistant was in place when the Ravens transformed their offense midway through the ’18 season, upon moving from Joe Flacco to Lamar Jackson, and has generated OC interest in the past.

The Eagles were interested in Urban last year but did not end up filling their OC position. However, this marks the first known interview Urban has received for an offensive coordinator role. Prior to helping Marty Mornhinweg and then Greg Roman change up the Ravens’ offense for their soon-to-be MVP quarterback, Urban spent seven seasons as the Bengals’ wide receivers coach. Urban, 47, coached five-year Lions wideout Marvin Jones throughout his Cincinnati tenure, though Jones is a free agent this year.

While the Lions interviewed OC-turned-interim HC Darrell Bevell for their HC job, Campbell landing the position signals the franchise will go in a new direction on offense. More OC candidates will soon emerge.