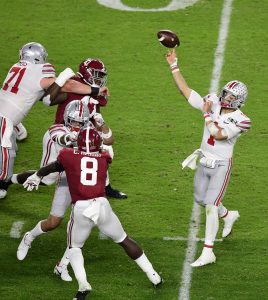 “Growing up, my dream was to one day play the game that I love at the highest level,” Fields said. “Now thanks to God’s grace and mercy, along with the help of you all, I am in a position to turn that dream into reality.”

Fields began his college career at Georgia before transferring to Ohio State in 2019. In just two short years, he cemented himself as one of the most accomplished Buckeyes inn program history. The dual-threat QB threw for 5,373 yards, 63 touchdowns, and nine interceptions across 22 starts. Now, the two-time Big Ten Offensive Player of the Year is on track to be an early pick in the spring.

The Jaguars are expected to select Clemson star Trevor Lawrence No. 1 overall, though Urban Meyer has indicated that Fields will also be considered. Most analysts have Fields as one of this year’s top three QBs — at minimum — along with BYU’s Zack Wilson.