Raise your hand if you saw this one coming. Following news from last night that Lions quarterback Matthew Stafford would welcome a trade to the Rams, we’re now hearing that Los Angeles is shopping around their incumbent signal-caller. Jourdan Rodrigue of The Athletic reports that the Rams have held “exploratory talks with multiple teams” regarding a Jared Goff trade. 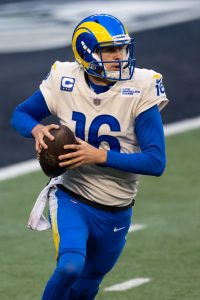 From a financial perspective, trading Goff is easier said than done. As Rodrigue explains, the Rams would be stuck with $22.2MM in dead money if they were to trade the former first-overall pick. However, a trade would be more palatable if it took place after June 1, as the Rams would be left with only $6.8MM in dead money (plus another $15.4MM in dead cap in 2022). As our own Sam Robinson pointed out last night, releasing Goff is also unrealistic. The guarantees in the quarterback’s four-year, $134MM deal go through 2022, and the organization doesn’t have an easy out on that contract until 2023. While Stafford has base salaries of just $9.5MM and $12.5MM over the next two years, Goff’s contract certainly complicates any potential trade.

After earning Pro Bowl nodes in his sophomore and junior seasons (including a 2018 campaign where he helped guide the Rams to a Super Bowl loss), Goff has seemingly plateaued over the past two years. He tossed a career-high 16 interceptions in 2019, and his 20 passing touchdowns in 2020 was the lowest total since his rookie year (when he started only seven games). For comparison’s sake, Stafford has tossed fewer than 20 touchdowns only once since 2011, and that came during a 2019 campaign where he compiled 19 passing touchdowns in only eight games.

As Sam noted last night, Rams head coach Sean McVay and GM Les Snead have recently made comments indicating Goff’s status is less than secure. Rodrigue also notes that there’s a connection between the Rams’ and Lions’ front offices; new Lions GM Brad Holmes previously served as the Rams’ director of college scouting. Now ,that’s not to say that any Goff trade would necessarily involve the Lions; considering Detroit’s apparent desire to restart, it doesn’t seem that Goff would be a fit in any hypothetical Stafford-to-Los Angeles deal. Still, the connection between the front offices is too obvious to ignore.