After spending the 2020 season as the Texans’ defensive coordinator, Anthony Weaver will migrate to a familiar location. Nineteen years after drafting Weaver in the second round, the Ravens hired him as their defensive line coach and run-game coordinator. 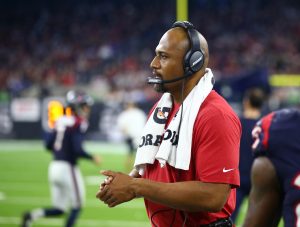 Weaver spent the past five seasons with Houston, serving first as the Texans’ D-line coach before a 2020 promotion to succeed Romeo Crennel as DC. The 40-year-old assistant received interest elsewhere but is now on Baltimore’s staff, joining Rob Ryan among former coordinators set to work under Don Martindale next season.

The Jaguars interviewed Weaver for their D-coordinator position, but the Urban Meyer-led team’s decision to hire Joe Cullen ended up helping Weaver land another job. Cullen served as Baltimore’s D-line coach for the past five seasons.

Weaver’s Texans defense did not fare well this past season, ranking 30th in DVOA. The former NFL D-linemen, however, has been an NFL assistant since 2012 and has a history with the Ravens. He operated as a starter for four seasons in Baltimore, from 2002-05, before signing with the Texans. It will be the Ravens who provide him an opportunity to bounce back.

“As a former Ravens draft pick who made significant contributions while playing here, he understands the culture of our organization and the standard to which Baltimore defense is held,” John Harbaugh said of Weaver.