Rob Ryan will be back in the NFL next season. The Ravens hired the former defensive coordinator as their inside linebackers coach. 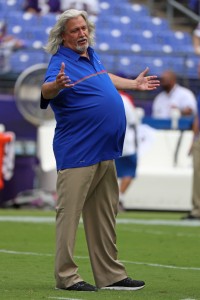 Ryan sat out another season in 2020, doing so after a one-year stay as Washington’s inside linebackers coach in 2019. The 58-year-old assistant has been a one-and-done in each of his past two roles, leaving Buffalo after Rex Ryan was fired in 2016.

The Ravens will be the ninth team to employ Ryan as an assistant. Beginning his career as a Cardinals DBs coach under father Buddy Ryan in the mid-1990s, Rob served as defensive coordinator for four teams — the Browns, Raiders, Cowboys and Saints — from 2004-15. The Saints fired him after their defense set an NFL record for touchdown passes allowed in 2015.

Jay Gruden‘s firing in Washington led Ryan out of the league again after the 2019 slate. But the brash staffer will now oversee Patrick Queen‘s development under DC Don Martindale. John Harbaugh saw linebackers coach Mike Macdonald defect to Jim Harbaugh‘s Michigan staff, leaving an opening in Baltimore. The Ravens, who had Rex Ryan on staff for 10 seasons — including during John Harbaugh’s 2008 debut — will fill that position with a high-profile candidate.