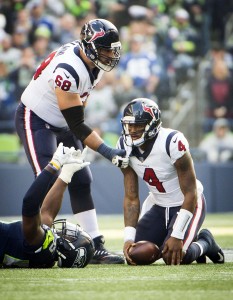 “Organizationally, we want to reiterate our commitment to Deshaun Watson,” said Caserio, pre-empting the slew of questions to come about Watson (Twitter link via ESPN.com’s Adam Schefter). “We have zero interest in trading the player..We have a great plan and vision for him. We look forward to spending more time with him.”

Caserio believes that “honest” and “forthright” communication can mend fences between the Texans and their star quarterback. Culley agreed as he backed up the GM with an even more confident declaration.

Watson is interested in going to the Dolphins or the Jets with a slight preference towards the Jets…or the Dolphins, depending on who you ask. The Panthers have also jumped in, less than one year after signing Teddy Bridgewater to a three-year, $63MM deal. The Jets and Dolphins could line up especially well for a trade, given their wealth of draft capital. And, with the Dolphins, the Texans could try for a Tua Tagovailoa trade.

But, despite all of the possibilities — and Watson’s strong desire to get out of town — the Texans say he’s staying put.