The high-profile Buccaneers free agent that has not generated much in the way of offseason headlines remains a priority for the team. Tampa Bay does not plan on letting Lavonte David leave without making a strong effort to retain him. 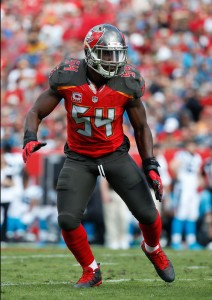 With the franchise since 2012, David is in the same boat with a rather famous collection of more recent Buccaneer additions — Rob Gronkowski, Ndamukong Suh, Antonio Brown, Leonard Fournette, Shaquil Barrett and Chris Godwin — in being on the cusp of free agency. And the Bucs already have a major linebacker investment under contract, in former top-five pick Devin White.

Bucs GM Jason Licht said it would be “extremely important” to keep the David-White tandem together, per Rick Stroud of the Tampa Bay Times (on Twitter). David signed a five-year, $50.25MM extension in 2015 and has remained a quality linebacker throughout that deal. His next contract will come ahead of his age-31 season.

The sides were not believed to have made substantial progress in their extension talks last year, and little has emerged indicating otherwise in the months since. But David did say at the time he wants to retire as a member of the Buccaneers. Pro Football Focus graded David as its fourth-best off-ball linebacker last season, putting him on track for big money from the Bucs or another team soon.

Since David’s last extension, C.J. Mosley and Bobby Wagner moved the needle for traditional linebackers considerably. Wagner’s $18MM-per-year extension tops that market, and 10 other linebackers signed deals worth more than David’s since his 2015 extension agreement. Although the salary cap reduction figures to play a role in older veterans’ earning prospects this year, David should still have a live market. And he may reside behind Barrett and Godwin in the Bucs’ free agency pecking order, creating an interesting situation ahead of the legal tampering period’s March 15 opening.