Although he is about to turn 32 years old and just posted the lowest single-season sack total of any season in which he was able play a full slate of games, J.J. Watt finds himself in high demand. The former face of the Texans, released by Houston last week, looks like a good bet to land a multi-year pact in short order. 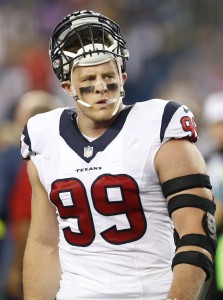 Over the weekend, Vic Carucci of the Buffalo News suggested that the Bills, who were among the teams linked to Watt in the immediate aftermath of his release, are unlikely to make a major free agent splash this offseason. Instead, Carucci said he expects Buffalo to use the majority of its cash on an extension for QB Josh Allen, which would keep the club out of the hunt for premier free agents like Watt.

However, ESPN’s Kimberley A. Martin reported that the Bills have indeed inquired about Watt, and that the interest is mutual (Twitter link). Carucci’s sources confirmed as much, saying that the Bills and Watt’s agent, Tom Condon, have been communicating. Interestingly, Condon also represents Allen, so perhaps he and Buffalo GM Brandon Beane can get a lot of work done over the coming days.

Watt is looking to join a contender with a top-tier quarterback, and the Bills, fresh off an AFC Championship Game appearance, certainly qualify. But there are about six teams that remain in the running, including the Browns, Titans, Steelers, and Packers, and all of them made the postseason in 2020. So while Carucci hears that Watt may start narrowing down his list in the coming days, it’s difficult to find a true frontrunner at the moment.

It’s easy to see why the Bills are seriously considering Watt. In addition to the fact that he is seen as a good fit with the team-first culture that Beane and head coach Sean McDermott have helped create in western New York, the Bills were just 20th in the league in quarterback pressures last season, and their top two defensive ends, Jerry Hughes and Mario Addison, are 32 and 33, respectively. Of course, Watt isn’t too far behind in terms of age, but while Watt graded out as the seventh-best edge defender in the league last year according to Pro Football Focus’ advanced metrics, Addison was the No. 78 ED.

The Bills are right up against the cap, so theoretically, they could release Addison to create a little more than $6MM in space and then put that money towards a contract for Watt. Spotrac projects a two-year, $24MM deal for the five-time First Team All-Pro.