The Vikings are set to hire Paul Guenther as a senior defensive assistant (Twitter link via NFL.com’s Ian Rapoport and Tom Pelissero). After being fired as the Raiders’ defensive coordinator, Guenther now has a job lined up for the 2021 season. 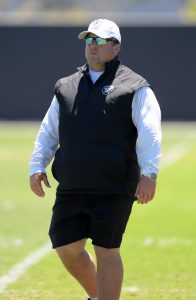 Guenther worked for Mike Zimmer in Cincinnati for six years, then took over his role as DC when Zimmer moved on to the Vikings in 2014. He’s held high-profile jobs ever since, though his reputation took a hit as the Raiders’ defense sagged in 2020.

The Raiders gave Guenther the heave-ho after an ugly Sunday night loss to the Colts. The 44-27 defeat saw the Raiders surrender 456 total yards, including 212 yards on the ground. It was the team’s second straight game with 200+ rushing yards surrendered. They were also in the league’s cellar for sacks and allowed 28.4 points per game under Guenther’s guidance.

Gus Bradley has since assumed Guenther’s old job in Las Vegas. Meanwhile, Guenther will get reacquainted with his winter wardrobe in Minnesota.