Matt Nagy decided to add an experienced college head coach to his staff. Former Texas and Houston HC Tom Herman will join the Bears as an offensive analyst, the team announced. 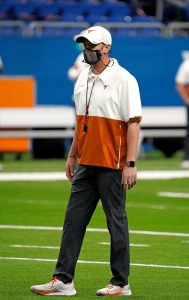 Fired after four seasons with the Longhorns, Herman is 54-22 in six seasons as a college HC. He has spent his entire career in the college game, beginning that run in the late 1990s.

Herman, 45, has an offensive coaching background. He worked as offensive coordinator at Iowa State and Ohio State from 2009-14, spending three seasons under Urban Meyer in Columbus before taking the Houston HC job. Herman, who was in charge of a Buckeyes national championship-winning offense that lost two QBs due to injury (in 2014, when both Braxton Miller and J.T. Barrett went down), has been either a college head coach or offensive coordinator since 2005.

Nagy has not been averse to bringing in college coaches for his staff. His hired ex-Oregon HC Mark Helfrich as his first OC with the Bears; that partnership lasted two years. Bill Lazor currently serves as Chicago’s OC.