Chase Daniel will make his way to Los Angeles to mentor the reigning Offensive Rookie of the Year. The Chargers agreed to terms with the veteran backup on Friday night, Adam Schefter of ESPN.com tweets. It’s a one-year agreement. 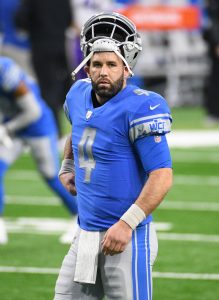 Recently released by the Lions, Daniel will move to his sixth NFL team and work as Justin Herbert‘s backup. Daniel was with the Bears during Brandon Staley‘s final season in Chicago (2018). Being quite well traveled, Daniel also has a history with new Bolts OC Joe Lombardi. Daniel worked with Lombardi during both his Saints stints.

The University of Missouri product has been one of the most financially successful backup quarterbacks ever, and despite being set for his age-35 season, Daniel has remained a coveted QB2. The Lions signed him to a three-year, $13.1MM accord in 2020 and used him at points. The Lions attempted to trade their backup but ended up releasing him. Now, Daniel and Matthew Stafford are each L.A.-bound.

Daniel has remained a viable passer despite having never started more than two games in a season. The former Heisman finalist has only started two games in just one of his 12 NFL seasons (2018, when a Mitchell Trubisky injury thrust his backup into action). Over his career, Daniel is a 68% passer. But that total has come on just 261 attempts.

He will step into the role Tyrod Taylor vacated. Brought in to be Philip Rivers‘ backup in 2019, Taylor entered the 2020 season as the Chargers’ starter. However, a pregame injection mishap began the Herbert era in Week 2 of last season. Taylor has since signed with the Texans.