The Colts are bringing back one of their rotational defensive linemen. They agreed to terms with Al-Quadin Muhammad on a one-year deal, Adam Schefter of ESPN.com tweets. 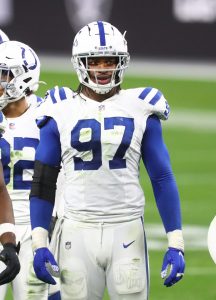 Muhammad’s second NFL contract will be worth $3.4MM, according to agent Drew Rosenhaus. He has played with the Colts for the past three seasons, after initially joining the team as a waiver claim in September 2018.

Part of the Saints’ standout 2017 draft haul, Muhammad played one season with New Orleans but has made his mark in Indianapolis. He played a career-high 56% of the Colts’ defensive snaps last season and has recorded five sacks over the past two years.

This move comes after Denico Autry‘s free agency defection to Tennessee. The Colts still have questions on their defensive front, with top edge rusher Justin Houston still unsigned and the team short on proven sack artists, Muhammad has been a key rotational presence throughout defensive coordinator Matt Eberflus‘ tenure.