Before sexual abuse lawsuits were filed against Deshaun Watson, the Dolphins were among the favorites to land the Texans’ signal-caller (if Houston actually agreed to trade him, of course). If that happened, then Miami’s own QB, Tua Tagovailoa, would either be in Houston as part of the trade return or playing second fiddle to Watson on the Dolphins’ bench. 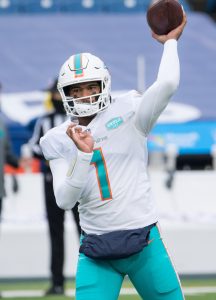 While a Watson trade seems like an impossibility at this point, there has been plenty of chatter that Miami could nonetheless seek a Tagovailoa upgrade in the draft. The club is armed with the No. 3 and No. 18 overall selections, and while Trevor Lawrence will be selected by the Jaguars at No. 1 overall, the Dolphins could be in a position to land a passer like BYU’s Zach Wilson or Ohio State’s Justin Fields.

But as Armando Salguero of the Miami Herald writes, the Dolphins will not draft a Tagovailoa replacement in this year’s draft. Salguero says the consensus in the scouting community is that the club is not looking to draft a QB with the No. 3 pick, and that Miami might even trade down from that selection in order to accumulate even more draft capital. As such, unless they’re absolutely in love with Alabama’s Mac Jones or another collegiate QB that could be available later on in the first round, the Dolphins appear set to roll with their second-year southpaw. Apparently, the only quarterback they would have considered to replace Tagovailoa would have been Watson.

GM Chris Grier said back in January that Tagovailoa would be the team’s starter — though he did decline to say whether the team would consider drafting a quarterback with the No. 3 overall pick — and head coach Brian Flores said earlier this month that he was excited to work with his young passer. As expected, though, that hasn’t stopped the rumor mill from churning.

After all, Tagovailoa had something of an up-and-down rookie campaign, and Flores turned to Ryan Fitzpatrick as a “reliever” during several of Tagovailoa’s more difficult outings. But the No. 5 overall pick of the 2020 draft also showed some flashes, and he will be given a chance to make a sophomore leap.