Jesse James‘ two-year stint in Detroit has come to an end. ESPN’s Adam Schefter reports (via Twitter) that the Lions have released the veteran tight end. The move will save the team more than $6MM over the next two years. 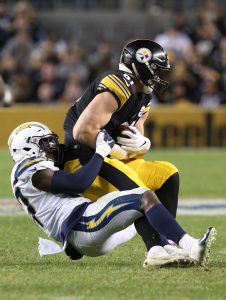 The 2015 fifth-round pick spent the first four seasons of his career with Pittsburgh, starting 36 totals games. His best season came in 2018 when he hauled in 30 receptions for 423 yards and two scores.

T.J. Hockenson obviously sits atop the Lions tight ends depth chart, but the team will surely be looking for some reinforcement behind him. Hunter Bryant is the only other tight end under contract for the 2021 campaign.