The Raiders are taking over the NFL’s Wednesday headlines, with their offensive line being the key focus. While they are retooling up front, the team is now expected to have potentially three starters back. 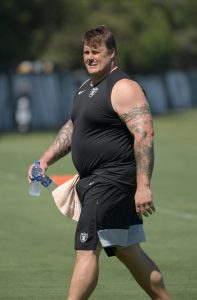 Richie Incognito indicated he will return to the Raiders, via Pro Football Talk’s Michael David Smith. When the Raiders cut the veteran guard earlier this month, he was rumored to be a candidate to re-sign.

Going into his age-38 season, Incognito will rejoin left tackle Kolton Miller and fellow guard Denzelle Good, whom the Raiders also agreed to re-sign Wednesday. Incognito had previously signed a Raiders extension, but after missing 14 games last season due to injury, the team shed that contract. It is likely the polarizing veteran’s latest accord comes in at a lower rate.

While Incognito has missed two full seasons, largely because of off-field issues, he has played well when available. Pro Football Focus has graded the journeyman blocker as a top-25 guard in each of the seasons he has played since 2010. Incognito was 3-for-3 in Pro Bowls with the Bills and helped the Raiders assemble one of the NFL’s best lines upon signing with Oakland in 2019. Despite missing extensive time last year and undergoing a late-season foot surgery, Incognito is believed to be healthy ahead of the Raiders’ offseason program.

Incognito will return to a new-look O-line. The Raiders have traded both Trent Brown and Rodney Hudson and are trying to trade Gabe Jackson. If the Raiders cannot unload Jackson, who was acquired before the second Gruden regime began, it is likely he will be released.

6 comments on “Raiders Expected To Bring Back Richie Incognito”