The Raiders have undergone a major shakeup of their offensive line this month, trading high-priced blockers Rodney Hudson, Gabe Jackson, and Trent Brown. The club did bring back guards Denzelle Good and Richie Incognito while adding former Texans pivot Nick Martin, and according to Vincent Bonsignore of the Las Vegas Review-Journal, the Raiders also want to keep one of their former first-rounders in the fold for the long haul (Twitter link). 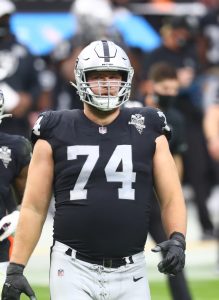 Bonsignore says Las Vegas is prioritizing an extension for left tackle Kolton Miller, the No. 15 overall pick of the 2018 draft. The team will need to decide whether to pick up Miller’s fifth-year option for 2022 — valued at $10.88MM — by early May, but that is a mere formality at this point.

Negotiations could certainly be interesting. There are now three left tackles — San Francisco’s Trent Williams, Green Bay’s David Bakhtiari, and Houston’s Laremy Tunsil — earning over $20MM per year, and Baltimore’s Ronnie Stanley is pulling down $19.75MM per year. But all four of those players have at least one Pro Bowl to their credit, while Miller has not earned any such accolades. Plus, because the Raiders can keep him under club control for two more seasons at below-market rates, Miller may need to give up a little earning power if he truly wants the security of a long-term deal.

But Miller has certainly proven himself worthy of a new contract. Many believed Jon Gruden reached when he selected the UCLA product, and those rumblings only intensified when Miller struggled in his rookie campaign. Still, the club saw promise in the 6-8, 325-pounder and stuck with him on the blindside even after signing Brown to a major free agent deal in March 2019.

Miller has since rewarded that faith, as he has turned in back-to-back solid seasons and still appears to be on an upward trajectory. Pro Football Focus considered him the 34th-best tackle in the game in 2020 (out of 79 qualifiers), but he earned the 15th-best pass-blocking score. His run-blocking mark pulled him down a bit, but again, there is reason to believe he will only continue to improve.

And he may soon become the elder statesman of the OL room. As Bonsignore tweets, one of the primary reasons the team parted with a few high-priced O-linemen over the past several weeks is because of the depth of the 2021 class of blockers, so look for Gruden and GM Mike Mayock to add some reinforcements to QB Derek Carr‘s collection of bodyguards next month.