Needing some help on the edge, the Seahawks will bring back Benson Mayowa. The veteran pass rusher agreed to re-sign with the team Tuesday, Tom Pelissero of NFL.com tweets. 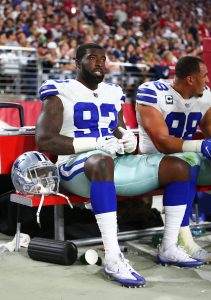 Mayowa signed with the Seahawks last year — for one year and $3.1MM — and started nine games. Mayowa contributed six sacks and now has 13 over his past two seasons. This stands to mark the first time Mayowa will have played with the same team in consecutive seasons since he was with the Cowboys from 2016-17.

The 29-year-old defender began his career with the Seahawks, playing a backup role on their 2013 Super Bowl-winning squad, and played two stints with the Raiders. Mayowa was also with the Cardinals in 2018. He will rejoin a Seahawks pass rush that houses 2019 first-round pick L.J. Collier, Jarran Reed and the recently re-signed Poona Ford. Both Carlos Dunlap and Bruce Irvin, fellow Seattle 2020 acquisitions, are in free agency.

Twenty-four of Mayowa’s 26 career sacks have come over the past five seasons. He has three six-plus-sack slates in that span. The Seahawks released Dunlap, in a cost-cutting move, earlier this month. The sides could well agree to a reunion at a reduced rate, but for now, Mayowa represents a key addition for the team.