A free agent for the first time, Giovani Bernard agreed to join the defending Super Bowl champions. But prior to his Buccaneers agreement, the veteran passing-down back received interest from other NFC teams. 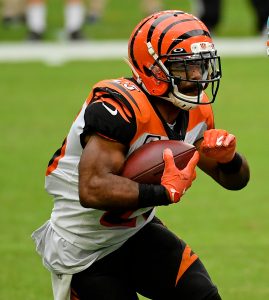 The 49ers and Seahawks also attempted to sign the eight-year vet, Jenna Laine of ESPN.com tweets. Pete Carroll and Russell Wilson contacted Bernard, per Laine, though Bruce Arians and Tom Brady did as well.

Seattle re-signed Chris Carson and still has former first-round pick Rashaad Penny on its payroll. But the former is not known for his receiving chops, and the latter missed most of last season due to injury. The Seahawks have not incorporated their backs into the receiving game extensively during Wilson’s career. No Seattle back has eclipsed 300 receiving yards since Marshawn Lynch in 2014.

Bernard could have provided an intriguing weapon for the team. Wilson’s effort in attempting to recruit the veteran should also serve as a good sign for his Seattle status, which became uncertain for the first time this offseason.

San Francisco’s cap sheet no longer includes Tevin Coleman and Jerick McKinnon‘s veteran salaries, but the 49ers do still employ key cogs Raheem Mostert and Jeff Wilson. Kyle Shanahan, however, valued McKinnon’s passing-game ability when he authorized a then-top-five running back accord in 2017. The 49ers, who saw injuries wreck McKinnon’s chances of living up to that contract, appear to be on the lookout for a receiving back capable of complementing Mostert and Wilson.