After 12 seasons, the Patriots may well be cutting ties with Julian Edelman. They released their longtime slot receiver on Monday, according to the NFL’s transaction wire.

The Pats released Edelman with a failed-physical designation. Edelman has mulled retirement this offseason, Mike Reiss of ESPN.com tweets. Such an announcement may follow. The veteran wideout, who will turn 35 in May, has continued to battle knee trouble this year, Doug Kyed of NESN.com tweets. 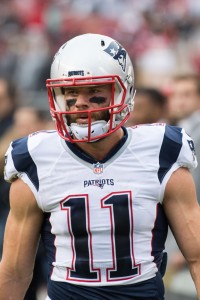 Barring a reunion, this will close the book on one of the more interesting careers in the history of the Patriots and the receiver position. The 5-foot-10 wideout has not made a Pro Bowl and did not have much of a role on offense until his fifth season, but he has the second-most playoff receiving yards in NFL history (1,442) — behind only Jerry Rice‘s 2,245 — and was integral to the Pats’ passing game for the past several years.

Injuries, however, have limited Edelman in recent years. He missed 10 games last season and underwent knee surgery late in the year. The 12th-year receiver, who missed the 2017 season with a torn ACL, caught 21 passes for 315 yards and no touchdowns in the franchise’s first post-Tom Brady campaign.

Struggling for much of the Bill Belichick era to identify receiver talent early in drafts, the Patriots took a flier on a quarterback from Kent State in the 2009 seventh round. While All-Pro Wes Welker was still in the heart of his dominant run as New England’s primary slot weapon, Edelman took the reins ahead of his fifth season. Welker’s Denver defection began Edelman’s ascent, and he played a pivotal role in the second leg of New England’s dynasty.

Edelman earned MVP honors in Super Bowl LIII, has six 100-yard receiving games in the playoffs — including two such outings in Super Bowls — and made the defining catch of his career against the Falcons to help the Pats erase a 28-3 deficit to win their fifth championship. The former MAC passer/ball carrier produced three 1,000-yard seasons, with his most recent coming for an embattled Patriots passing attack in Brady’s final New England slate.

This release will tag the Pats with $2.7MM in dead money while also creating just more than $3MM in cap space. The team made changes to its receiver room this offseason, signing Nelson Agholor at a surprisingly high rate and adding Kendrick Bourne. The Patriots also signed tight ends Jonnu Smith and Hunter Henry and are likely set to deploy plenty of two-tight end sets. Even so, subtracting Edelman from this situation still leaves the team with somewhat of a need at the receiver position.