The Falcons have received trade inquiries for wide receiver Julio Jones (Twitter link via NFL.com’s Ian Rapoport). The Falcons have indicated that Jones will be staying put, but teams believe that Atlanta’s cap situation could nudge them towards a deal. Peter King of NBC Sports and Albert Breer of The MMQB have heard similar buzz, noting that they wouldn’t be shocked if the All-Pro is traded. 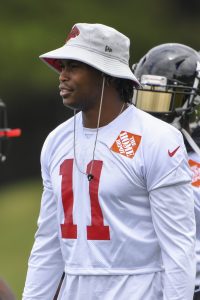 For cap reasons, any Jones trade would have to wait until after June 1, when his dead money charge could be split between 2021 and 2022. So far, the Falcons have rebuffed inquiries on their more notable veterans, including quarterback Matt Ryan, linebacker Deion Jones, and left tackle Jake Matthews. Still, Breer believes that a first-round pick could be enough to sway the Falcons. King, meanwhile, thinks that a second-round pick sounds about right.

Jones, 32, remains an effective weapon when healthy. And, even though he missed seven games last year, his remaining salaries between now and 2023 are fairly reasonable with the Falcons eating a chunk of the dollars. Any team acquiring Jones would be on the hook for payouts of $15.3MM, $11.513MM, and $11.513MM in each season.

“We expect Julio to be a Falcon, to be playing next year at a very high level as well,” Falcons owner Arthur Blank said recently. “God-willing, taking care of his body, his hamstring will be healed up. He’ll be able to play in more games than he played last year..”

Still, if new GM Terry Fontenot gets the right offer, Jones could wind up elsewhere in June.