Free agent tackle Alejandro Villanueva is set to meet with the Ravens this week (Twitter link via NFL.com’s Ian Rapoport). The Steelers haven’t shown much interest in bringing him back, but they could wind up seeing him a couple of times in 2021. 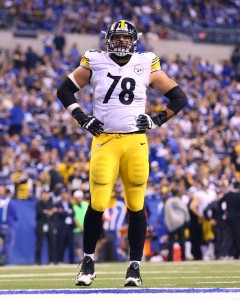 Villanueva has spent the last seven years with the Steelers. For much of that span, the Steelers’ offensive line was viewed as a strength. However, things declined over the last couple of years as the unit got older. The departure of offensive line coach Mike Munchak may have also been a factor.

Villanueva was never considered an elite left tackle, but he usually did an okay job of protecting Ben Roethlisberger‘s blindside. He’s also been durable, starting all 16 games in each of the past five seasons.

The Ravens are currently projected to start the returning Ronnie Stanley at left tackle with Orlando Brown Jr. on the right side. However, after performing well in Stanley’s stead last year, Brown says he wants to stay at LT. If Brown forces a trade, Villanueva could be considered for the starting lineup. Of course, the Ravens prefer to keep Brown and employ someone like Villanueva as a backup.