Dolphins linebacker Elandon Roberts landed on injured reserve late last season with a knee injury, but the team never said exactly what it was, only that it was “significant.” We still don’t know the exact injury, but significant may have been an understatement. 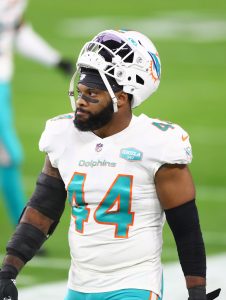 Speaking to the Miami media today, Roberts said he underwent surgery on the knee, and declined to say if he’ll be ready for Week 1, Barry Jackson of the Miami Herald tweets. Given those context clues, it seems quite possible Roberts tore an ACL.

Whatever the case, the Dolphins felt comfortable enough in his status to give him a $650K signing bonus on the one-year, $2MM contract they gave him back in March. He also has $750K available in incentives for 2021.

It was a tough break for Roberts to get seriously hurt right before entering free agency, and he likely would’ve cashed in more had he not got down in late December. The former Patriot who followed Brian Flores to Miami started 11 games for the Dolphins last year, finishing with 61 tackles (eight for a loss).