Add another player to the list of 2018 first-round picks not getting their options picked up. The Jaguars have declined the fifth-year option on Taven Bryan, Jeremy Fowler of ESPN.com tweets. 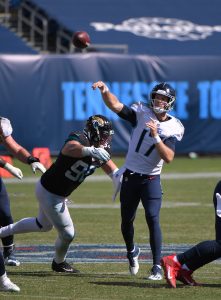 Had they picked it up, the Jags would’ve owed Bryan a fully guaranteed $7.368MM in 2022. He’ll now be a free agent after this season. The 29th overall pick of the 2018 draft hasn’t done much to stand out in the pros. The defensive tackle has appeared in all 48 games since getting drafted, but has only started 17.

This past season in 16 games and eight starts, he played about 45 percent of the defensive snaps as a run-stuffer. He finished with 18 tackles, three for a loss, and a half sack. In 2019 the Florida product was more productive, with 30 tackles, five for a loss, and two sacks.

The new regime in Jacksonville has no ties to him, and they made upgrading defensive tackle a priority this offseason. The Jags signed Roy Robertson-Harris and traded for Malcolm Brown.