Brian Hoyer signed a deal to return to the Patriots this past week, but they apparently had real competition from another AFC East team. 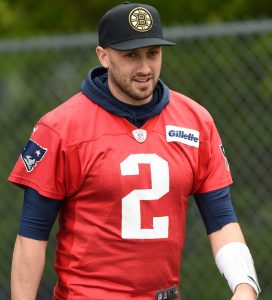 The Jets “made attempts to sign Hoyer,” a source told Jeremy Fowler of ESPN.com (Twitter link). We heard all the way back in early April that the Jets had met with Hoyer, but we didn’t know until now they made a serious push.

Fowler writes that New York wanted Hoyer as a backup to rookie starter Zach Wilson, but that the veteran journeyman lives in the New England area. That combined with “his familiarity with Patriots helped put signing with N.E. over the top.”
It’s an interesting choice from Hoyer, since the Patriots’ quarterbacks room is more crowded. They’ve got Cam Newton, Mac Jones, and Jarrett Stidham already on the roster. Newton and Jones are presumably guaranteed roster spots, so Hoyer and Stidham could be battling it out for the final gig.
Right now the Jets only have youngsters James Morgan and Mike White behind Wilson, so they’ll presumably be adding a veteran backup/mentor at some point.