Tyrell Crosby could be on the move. ESPN’s Jeremy Fowler reports (via Twitter) that Detroit is “giving indications it will consider or look to move” the starting offensive lineman. 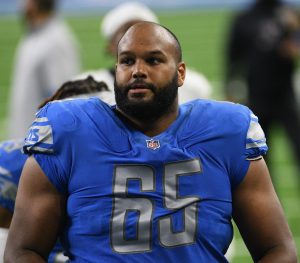 Crosby joined the Lions as a fifth-round pick in 2018, and he’s transformed into one of the team’s more reliable offensive linemen. After starting only seven of his 26 games through his first two seasons in the NFL, Crosby had an opportunity at a larger role in 2020 following Halapoulivaati Vaitai‘s struggles at right tackle.

The offensive tackle ended up starting 11 of his 12 games for the Lions this past season. This naturally led to an uptick in snaps, as he ultimately appeared in a career-high 63-percent of Detroit’s offensive snaps. Crosby also committed only three penalties, a reduction from the seven he committed in 2019.

The Lions ended up using the seventh-overall pick on offensive lineman Penei Sewell, and the Oregon product should immediately slide into the starting lineup. While Taylor Decker locked in on the left side, Crosby is staring at a backup role heading into 2021. His versatility means he could still see plenty of snaps, and his $2.25MM cap hit isn’t enough to break the bank. Still, considering the Lions new depth, it makes sense that the front office is exploring their options ahead of Crosby’s impending free agency in 2022.