There was a lot of talk about Chiefs offensive coordinator Eric Bieniemy this offseason, and how he was left without a head coaching opportunity once again. Bieniemy has become a subject of hot debate in recent offseasons, but one man who isn’t sweating over the wait is Bieniemy himself. 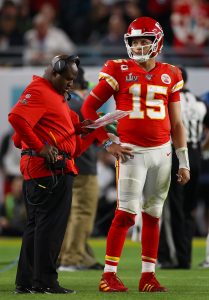 The Andy Reid disciple got interview requests from all seven teams with openings this past cycle, but didn’t get one of the jobs yet again. But the Kansas City assistant isn’t getting caught up in the chatter, telling Jason La Canfora of CBS Sports in a recent interview that he’s just fine with how everything has played out.

“I am blessed and fortunate to be working with a Hall of Fame head coach. On top of that, the quarterback ain’t bad, either” he declared. That might be an understatement. “And we’ve had a great deal of success since we’ve been here. So I’m not complaining at all. Would I like to be a head coach? Yes I would. But you know what, it’s going to happen, at the right place, with the right people, at the right time.”

It’s a mature, and wise, sentiment from the man in charge of one of the most prolific units in recent league history. He’s still only 51, fairly spry by NFL head coaching standards, and doesn’t need to rush into a bad situation.

“At the end of the day like I always tell folks, I don’t allow anything to dictate my outcome or my future,” Bieniemy said. “So the only thing we can do, alright, is to continue going back to work and to continue chopping wood.”

The couple of frustrating years notwithstanding, Bieniemy seems confident he’ll become the next member of the Reid head coaching tree before too long. He’ll almost certainly be a top candidate on the coaching carousel come next January.

6 comments on “Eric Bieniemy: HC Opportunity Is ‘Going To Happen’ At ‘Right Time’”