The Dolphins have their other first-round pick under wraps. After quickly signing Jaylen Waddle in mid-May, they’ve now inked the 18th overall pick from that weekend. 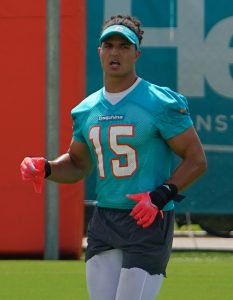 Miami has signed defensive end Jaelan Phillips to his rookie contract, the team announced Wednesday. A Miami product, Phillips won’t have to move very far to start his pro career. A decorated recruit out of high school, Phillips started his college career at UCLA and was very highly regarded. Unfortunately concussions and other injuries caused him to medically retire from football in 2018, before he reversed course and returned to play at Miami last year.

Phillips was a second-team All-American for the Hurricanes last season, as he finished with 15.5 tackles for loss and eight sacks in 10 games. Scouts were very high on his talent, although there were naturally some concerns about his medicals.

Clearly teams felt comfortable enough, as he was a consensus first-rounder entering the draft. It’s often been stated that had it not been for his medical issues at UCLA, he would’ve been a top-ten pick.

The Dolphins don’t have a ton at edge rusher after cutting Kyle Van Noy this offseason, so Phillips should see a lot of immediate playing time if he’s ready. Miami now has four of their seven picks locked up.