Nick Saban has been off the NFL radar for a bit now, and coming off yet another national championship, the Alabama head coach does not look likely to resurface in the pros in the near future. 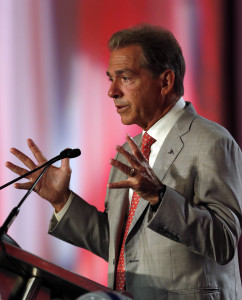 Soon set to begin his 15th season as the Crimson Tide’s head coach, Saban agreed to an extension to stay in Tuscaloosa on Monday. The deal runs through the 2028 season. The 69-year-old HC is set to make $8.43MM this season, according to ESPN.com’s Chris Low, who adds Saban’s salaries will climb to $10MM per year over the life of the contract. Although college coaches frequently break contracts to venture into the NFL, Saban’s situation certainly does not point to him taking that path again.

Alabama is coming off its sixth national championship under Saban, whose team routed Ohio State despite Jaylen Waddle playing through a major injury and Heisman-winning teammate DeVonta Smith missing much of the game due to injury. Saban has now won seven national titles as a coach, with the previous championship — in 2003 — coming at LSU.

The ’03 Tigers’ title led to Saban trying his hand in the NFL. His Dolphins run (15-17) did not go especially well, and Alabama provided a prime landing spot. Saban popped up on the NFL radar in connection to the Giants’ 2018 vacancy, but he pushed back on any interest in the job (which eventually went to Pat Shurmur) shortly after a Bruce Arians-started rumor emerged.

Prior to his mid-2000s Dolphins tenure, Saban coached for two then-AFC Central teams in the 1980s and ’90s. He worked under Jerry Glanville as Oilers defensive backs coach for two seasons and more famously resided as Bill Belichick‘s defensive coordinator from 1991-94 with the Browns. It would seemingly take a perfect situation for Saban to return to the league, and Monday’s development makes that possibility more remote.