The Packers are set to sign inside linebacker De’Vondre Campbell (Twitter link via ESPN.com’s Rob Demovsky). The deal could become official by the end of the business day on Wednesday, if everything checks out with his physical. 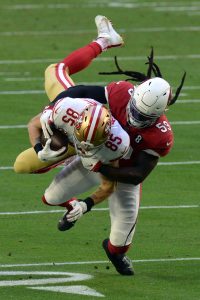 Green Bay has been on the lookout for ILB support ever since moving on from Christian Kirksey. Campbell, who previously started for the Falcons and Cardinals, overlapped with Packers head coach Matt LaFleur in Atlanta. They’ll reunite in Wisconsin as Campbell tests his veteran experience against Krys Barnes, Kamal Martin, and Ty Summers.

The Packers were also connected to Campbell last offseason, but they chose to sign Kirksey instead. This time around, they held off on signing Campbell until after the May deadline, so this pickup won’t impact their compensatory pick calculation for 2022.

Campbell first entered the league a fourth-round pick in 2016, the year he played for LaFleur. All in all, he’s appeared in 75 career games, including 70 starts. He was also first-string for all 16 games of his games last year with the Cardinals. Campbell’s best work arguably came in 2019, when he notched 129 stops for the Falcons.

Terms of the deal are not yet known, but Campbell likely signed for less than last year’s one-year, $6MM pact with Arizona.