Zach Von Rosenberg‘s hopes of going from minor league baseball to the NFL hit a snag Tuesday. The Vikings’ Sheldon Richardson signing led to the departure of the aspiring punter. 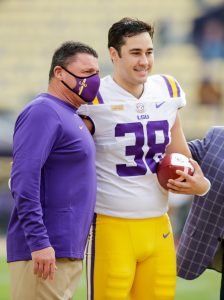 Minnesota waived Von Rosenberg on Tuesday, leaving Britton Colquitt as the only punter on the team’s 90-man roster. Colquitt has held the Vikes’ punting job for the past two seasons.

Von Rosenberg spent six years in the Pittsburgh Pirates’ farm system, going from rookie league to the High-A level. The former sixth-round MLB pick spent time as a starter and a reliever in this span but left baseball after the 2014 season.

The Vikings signed the pitcher-turned-punter as a UDFA in May. Von Rosenberg, now 30, spent the past four seasons as LSU’s punter. He ended his Baton Rouge run with two second-team All-SEC honors. The rest of the NFL will have a chance to claim the developmental specialist on waivers.