The Bengals and Sam Hubbard have reached agreement on a four-year, $40MM extension (Twitter link via Adam Schefter of ESPN.com). Hubbard has been of the few bright spots in the Bengals’ front seven. Now, they’ve got him locked up for years to come. 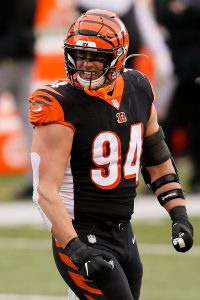 Hubbard has split time at defensive end and linebacker, racking up 177 tackles and 16.5 sacks since his 2018 debut. Over the last three seasons, he’s proven to be one heck of a third round find. The Bengals hope for similar results from this year’s crop of mid-round linemen — Joseph Ossai, Cameron Sample, and Tyler Shelvin. But, even if they all don’t pan out, they’ll have the 26-year-old leading the charge for years to come.

The bulk of Hubbard’s 16.5 career sacks came in his first two pro seasons. Last year, he had just two, thanks in part to a mid-year elbow injury. The Bengals are counting on him more than ever now that Carl Lawson (5.5 sacks in 2020) has moved on to the Jets.

This year, the Ohio State product will be joined by a number of new faces, including ex-Saints defensive end Trey Hendrickson. As a first-time full-time starter, Hendrickson notched 25 QB hits, and 13.5 sacks. Between Hendrickson and continued improvement Hubbard, the Bengals are expecting much better results than last year when they finished one of the worst pass rush units in the NFL.