Cameron Meredith has not played since November 2018, but the former Bears and Saints wide receiver will have a comeback opportunity after this lengthy hiatus. The CFL’s Winnipeg Blue Bombers added Meredith to their roster Thursday. 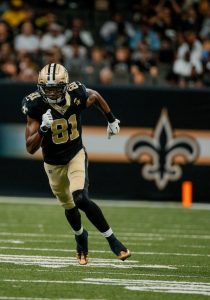 The time off may have been necessary for the 28-year-old wideout, who suffered multiple career-altering knee injuries while in the NFL. Coming off a breakout 2016 season, Meredith suffered left ACL and MCL tears during a 2017 preseason game. He then encountered more damage to that knee in 2018, when his season ended early because of arthroscopic surgery.

A UDFA out of Illinois State, Meredith led the 2016 Bears in receiving with 888 yards — during a season in which Jay Cutler, Brian Hoyer and Matt Barkley all started at least five games with Chicago. After Meredith’s injury, the Bears gave him an original-round RFA tender in 2018. This invited interest from multiple teams. The Saints signed him to a two-year, $9.6MM offer sheet, with $5.4MM guaranteed, but that pact only led to a nine-catch, 114-yard abbreviated season. The Patriots signed Meredith in 2019 but cut him ahead of the regular season.

“I’ve taken the last couple of years to sit back, enjoy time with my family and do the necessary therapy and treatment. I’ve been doing like the lifting, the massages, everything,” Meredith said, via Ed Tait of BlueBombers.com. “It’s been a nonstop 2½-year grind. I’d like to say it wasn’t for nothing because now I’ve got this opportunity to do something with it.”