The Giants will be down one of their veteran tight ends for the season. Levine Toilolo was carted off a Giants practice field Wednesday, and the team subsequently announced he suffered a torn Achilles. 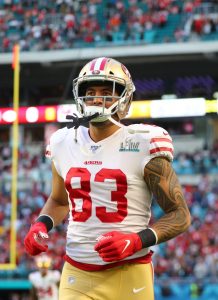 This was set to be Toilolo’s second season with the Giants. While the Giants signed Kyle Rudolph to pair with Evan Engram, Toilolo was in place as the team’s top blocking tight end.

Toilolo agreed to a pay cut to stay in New York this offseason, reducing his 2021 salary from $2.95MM to $1.35MM. This represents a tough break for the ninth-year veteran. Toilolo, who turned 30 last week, played in all 16 Giants games last season. One year remains on Toilolo’s deal.

Beginning his career with five seasons in Atlanta, Toilolo succeeded Tony Gonzalez as the Falcons’ starting tight end. The former fourth-round pick was part of Atlanta’s Super Bowl LI-bound team and, after a 2018 stopover in Detroit, later rejoined Kyle Shanahan in San Francisco. Toilolo suited up for a second Super Bowl during his lone 49ers season.