The Jaguars used the No. 9 overall pick last year on cornerback C.J. Henderson. Although the young defender saw his rookie season cut short, he was viewed as a foundational piece for the franchise. Jacksonville’s new regime may not feel the same way. 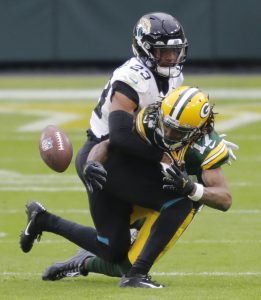 Multiple NFL executives believe Henderson is now available via trade, Jeremy Fowler of ESPN.com tweets. Buzz around the league has surfaced that the Jaguars are shopping the second-year corner, Fowler adds. This would certainly be a surprising development, but new decision-makers are running the show now in north Florida.

Henderson, the second corner off the board last year, just came back off the Jags’ reserve/COVID-19 list. While the ex-Florida Gator and the Jags are believed to have a good relationship, Fowler tweets, the prospect he will be traded after one season now appears to be in play.

The Jags’ Dave Caldwell–Doug Marrone regime drafted Henderson and plugged him into the starting lineup in Week 1 of last season. Henderson arrived as the centerpiece of the team’s new-look cornerback group, following the trades of Jalen Ramsey and A.J. Bouye. Henderson played in eight games in 2020 but landed on IR in November. Henderson subsequently underwent shoulder labrum surgery. Pro Football Focus graded him as a middle-of-the-pack corner in 2020.

Urban Meyer and GM Trent Baalke have added some notable cornerback pieces this offseason, signing Shaquill Griffin and drafting Tyson Campbell in the second round. Henderson would seemingly still have a starting job in Jacksonville, should the team stand pat, but he would also generate interest. After a rookie season in which Henderson played just half the Jags’ games, however, his trade value may not produce a first-round pick. But given that the Jags covered Henderson’s rookie-contract signing bonus, he will obviously fetch the franchise a notable trade haul. The 22-year-old cover man is signed through 2023, with a fifth-year option covering 2024, and a team that trades for him would only be responsible for his rookie-scale base salaries.