Matt Cavanaugh is back for a second stint with the Jets. The team’s former quarterbacks coach will return as a senior offensive assistant, according to ESPN.com’s Rich Cimini. 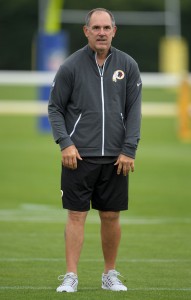 The longtime NFL assistant was last with the Jets from 2009-12, when he oversaw Mark Sanchez‘s initial development. Cavanaugh will now provide some experience for the Jets’ new offensive staff, which is set to groom No. 2 overall pick Zach Wilson.

This hire comes in an emergency circumstance. The Jets sought an experienced coach, per Cimini, to fill the void that emerged when Greg Knapp died from injuries sustained in a bicycle accident July 22. The Jets hired Knapp to be their passing-game coordinator this year. Now, Cavanaugh will provide assistance to new OC Mike LaFleur.

Cavanaugh, 64, began his NFL coaching career back in 1994. He served as offensive coordinator for three franchises — the Bears, Ravens and Washington — and last worked on Jay Gruden‘s staff in Washington two years ago. Cavanaugh’s Ravens OC stint, from 1999-2004, overlapped with Jets GM Joe Douglas‘ Baltimore stay. Douglas began as a Ravens scout in 2000.

The Jets have a first-time NFL play-caller (LaFleur) and a first-time quarterbacks coach (Rob Calabrese) on Robert Saleh‘s first staff. Cavanaugh, a former NFL backup QB, has 22 years’ experience on an NFL sideline.

One comment on “Jets To Hire Matt Cavanaugh As Assistant”