Lions Have Spoken With Quinton Dunbar

The Lions just lost cornerback Jeff Okudah to an unfortunate Achilles tear, and it sounds like they may be looking outside the building to help bolster their secondary. 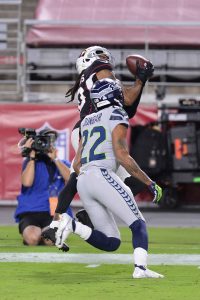 Detroit is “searching for CB help,” and they’ve spoken with free agent Quinton Dunbar, sources told Mike Garafolo of NFL Network (Twitter link). Those sources also said that the Lions had actually talked with Dunbar before the Okudah injury as well, so their renewed interest isn’t out of nowhere. It also sounds like they might face some competition for his services.

That’s because Garafolo notes that Dunbar “has a few options he’s sorting through” at the moment. Dunbar was with the Lions during camp, so he’s got plenty of familiarity with the system, but was cut in mid-August. He entered the league as an UDFA in 2015, and carved out quite the career for himself. He eventually became a starter in Washington, and had four interceptions in only 11 games in 2019.

Last offseason he was traded to Seattle, and after a bizarre legal situation, was eventually cleared to play. However injuries limited him to six games in his first and only season with the Seahawks, although he started all of them. Dunbar turned 29 in July.

One comment on “Lions Have Spoken With Quinton Dunbar”