Khalil Mack is battling a foot injury that might send him to injured reserve. The elite edge rusher is not expected to play this week against the 49ers, according to NFL.com’s Ian Rapoport and Mike Garafolo, who add the Bears are considering placing Mack on IR (Twitter link). 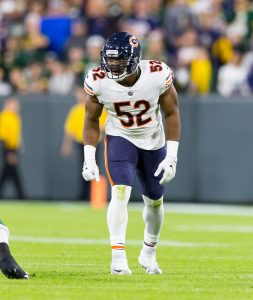 This would certainly be a blow to a reeling Bears team, which ranks last offensively. Chicago has again attempted to rely on its defense to stay in contention, but the Bears dropped to 3-4 after a blowout loss to the Buccaneers. Losing Mack for three games could KO the team’s fading postseason chances.

The 30-year-old star has gotten off to a strong start this season, having registered six sacks. Mack has not missed a game yet this year, and he has only missed two games during his three-plus-season Chicago stay. An IR trip would sideline Mack for games against the 49ers, Steelers and Ravens. With Chicago’s bye coming in Week 10, Mack would not be eligible to return until Week 12.

Acquired via the 2018 blockbuster trade with the Raiders, Mack has been the centerpiece of the past four Bears defenses. The former Defensive Player of the Year has delivered on the Bears’ investment, even if the high sack totals from Mack’s Oakland days have not followed him to Chicago. Mack’s streak of double-digit sack seasons stopped at four after his All-Pro 2018 showing with the Bears, but he is well on pace to post his fifth 10-plus-sack slate this year.

This foot problem stands to impede his pursuit, though it is not yet certain Mack will be down for more than just Week 8.