One of the league’s Super Bowl contenders is going after Jaylon Smith. While other suitors are believed to be in the mix, Ian Rapoport of NFL.com notes the Packers are making a push to sign the former Cowboys linebacker (Twitter link). 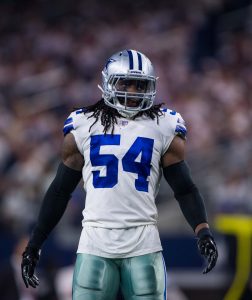 Matt LaFleur spent a season at Notre Dame during Smith’s tenure, his 2014 sophomore slate, and remains high on the accomplished defender. The Cowboys released Smith on Tuesday night. LaFleur coached the Fighting Irish’s QBs in 2014.

Green Bay has not been especially high on making splashy moves at its off-ball linebacker spots, but the team has turned to the midlevel free agent market multiple times in the past two years. The Packers signed Christian Kirksey in 2020 and, after releasing him this year, added De’Vondre Campbell.

Despite coming into the league in 2016, Smith is still just 26 and grades as Pro Football Focus’ No. 13 off-ball linebacker through four games. It would certainly add up if multiple teams made strong efforts to sign him. Green Bay holds just more than $7MM in cap space, which ranks 12th in the NFL.

Campbell has proven effective for the Packers thus far, having made 40 tackles in four games and intercepting a pass. He grades as PFF’s No. 4 overall linebacker, though we are still without too large of a sample size. Green Bay also has second-year man Krys Barnes on its defensive second level. Barnes missed Week 4 with a concussion.

Smith spent the past four seasons as a Cowboys starter. Despite a severe foot injury sustained in his final Notre Dame game, the former second-round pick has not missed an NFL game since sitting out his rookie season. Smith produced three straight 120-plus-tackle seasons in Dallas, topping out at 154 in 2020. That total ranked second in the NFL. Dallas, however, hired a new defensive coordinator and changed up its linebacking personnel by drafting Micah Parsons in the first round and signing Keanu Neal. This led to Smith becoming a marquee in-season free agent.