Jacob Eason has found his next job. After getting waived yesterday by the Colts, the quarterback has been claimed by the Seahawks, reports ESPN’s Brady Henderson (via Twitter). 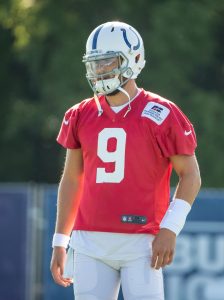 The Seahawks have been sniffing around for some reinforcement at quarterback following Russell Wilson‘s placement on IR. Geno Smith will continue to sit atop the depth chart, and Eason will temporarily serve as his backup. Seattle is also rostering Jake Luton and Danny Etling on their practice squad.

Eason found himself on the outside looking in during his time in Indy. He was already the third-stringer QB behind Carson Wentz and Brett Hundley, and the team decided to move on from the 2020 fourth-round pick after activating 2021 sixth-round pick Sam Ehlinger from IR.

Eason had a breakout college campaign in 2019, completing 64.2 percent of his passes for 3,132 yards, 23 touchdowns, and eight interceptions after transferring from Georgia to Washington. He made his NFL debut in Week 2, completing two of his five pass attempts for 25. He also tossed an interception.