Broncos QB Teddy Bridgewater has cleared the concussion protocol, as Adam Schefter of ESPN.com reports (via Twitter). With that, the veteran passer will start Denver’s Week 5 matchup against the Steelers this afternoon. 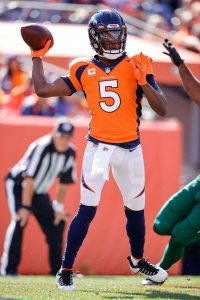 Bridgewater, acquired in an April trade with the Panthers, bested Broncos’ 2019 second-rounder Drew Lock in this summer’s quarterback competition, and he led Denver to a 3-0 start to the 2021 campaign. The three teams he defeated — the Giants, Jaguars, and Jets — boasted a combined 0-9 record going into last week, so the early-season success for Bridgewater and the Broncos came with something of an asterisk, but the QB and his team did exactly what they needed to do against weaker competition.

Their winning streak came to an end at the hands of the Ravens last week, a game that Bridgewater was forced to leave early due to a concussion. Prior to that, he completed seven of 16 passes for 65 yards and a touchdown.

Although Bridgewater did not do much in his time on the field, Lock’s relief performance did nothing to make head coach Vic Fangio think twice about turning the reins back over to his QB1 as soon as he cleared protocol. Lock appeared indecisive and could not generate any momentum, finishing 12 of 21 for 113 yards and an interception. Denver ultimately lost by a 23-7 score.

It is still unclear whether Bridgewater will have one of his top receiving weapons, wide receiver Courtland Sutton, joining him on the field in Pittsburgh today. Sutton, who rolled his ankle at practice on Thursday, will be a game-time decision, per Schefter.