Dee Ford has been designated for return, per an announcement from the 49ers. This will open a 21-day practice window for the defensive end — he’ll either be moved to the active roster in the next three weeks or lose his eligibility to play in 2021. 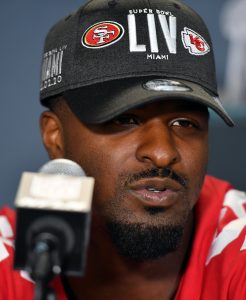 The eighth-year defender has struggled with injuries throughout his career. And, in addition to his bad back, Ford has also dealt with neck trouble and concussion-like symptoms this season.

“[My back issues have] never fully gone away. That’s something he’ll deal with most likely forever,” Kyle Shanahan said earlier this month. “So, something that’s on again, off again.”

The 49ers traded for Ford during the 2019 offseason and saw him play a key role in their Super Bowl LIV run as a part-timer. Unfortunately, he’s been limited to just 18 regular season games in SF over the last two seasons and change.

So far this year, Ford has three sacks and four quarterback hits to his credit.